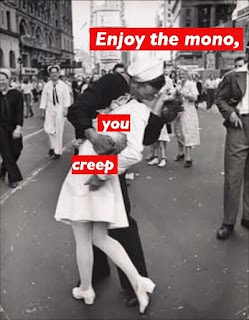 “Enjoy the mono, you creep!” she thought, as she felt his greedy hands pushing down into her flesh – a flesh, a skin that had been taken by surprise. Did he ask her permission for this kiss? Did he lean in slowly, shifting his sight from her eyes down to her lips? Did he kneel down on one leg before going in for the tongue? Did he tell her how beautiful she looked? Did he compare her to a summer’s day? No. The body language in this picture (his forceful, possessive grasp; her embarrassed hand trying to keep her skirt in place) says he didn’t. He saw her (most likely from behind), walked up to her and thought that – just on this day, this special day, when war was declared to be over – he could get away with a freebie. A manhandle. An invasion, a blitz, a campaign – just not the military kind. Given the portrayal of nurses in popular culture (especially in the war years) as altruistic, virginal, innocent and clean, I love the idea of a tainted, less-than-perfect, less-than innocent nurse. And in particular, having mononucleosis – the famous “kissing disease” – implies that she is tainted morally as well, not only physically. But beyond this rationale, first and foremost I chose this image and transformed it this way in order to allow her to fight back. She has embarked on her own defensive campaign, in response to his invasion. She is fighting back, with a biological weapon – just not the military kind. 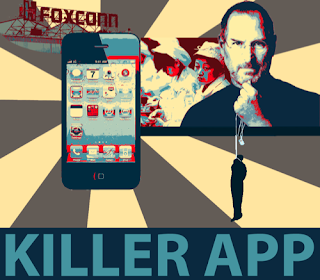 For this image, I used two political figures - Steve Jobs and the iPhone. I picked these to make a commentary about the egregious working conditions at Foxconn, the factory that manufactures Apple products.
At first, I started with just the iPhone image, with the intention of making the iPhone the “political figure” from the prompt, but since the death of Steve Jobs, many have criticized him, subverting his postmortem glorification by pointing out some of the dirtier parts of his decisions that get swept under the rug. Hence, I added an image of Steve Jobs as a sort of puppetmaster pulling the strings of death for the suicidal Chinese worker. Moreover, I think it is hard to talk about Apple and its relationship with Foxconn without thinking about Jobs’ role in it, or the decision to turn a blind eye.
“Killer App” has a few different meanings. On one hand, “killer app” has often been used to describe a popular Apple application - indeed, a game changer, and many applications in the Apple Store describe themselves as such. On another level, it points to the application process that the workers at Foxconn go through in order to get a job that may end up killing them physically (suicide or otherwise). And finally, the “killer” part of the text also points to the dehumanization of the manufacturing process. With “kill” being an action to cease life, I hope people will take it a step further to interpret it as stripping a human of their humanity for the capitalistic gains of a dominant empowered entity - in this case, Apple.
While I intended to use this image to criticize Apple’s device manufacturing decisions while acknowledging that Steve Jobs had been villainized for turning the blind eye to the conditions in Foxconn, this article reminds us that we who have smartphones also add to the impetus of Apple to look for cheaper and cheaper ways to manufacture phones. However, I still maintain that Apple is ultimately the one in power to make decisions regarding its device manufacturing, and the only thing they see is their bottom line, not the dehumanized workers treated like machines and worked until they drop.

Posted by Virginia Kuhn at 10:25 AM No comments:

In this assignment, students examine the issues surrounding access to the field of representation and the language of images, as well as ways in which word and image coexist, sometimes reaffirming each other, sometimes calling each other into question. They are asked to first design like Barbara Kruger, using one of a specific set of images that have national meaning, and then to choose a political figure and design like Shephard Fairey. All images are accompanied by statements of purpose (which are absent from this slideshow).
Posted by Virginia Kuhn at 11:14 AM No comments:

The translation of books into television/film is nothing new. The reverse, however, a filmic text becoming a book is pretty unusual. We will view Ways of Seeing in video form before reading the book. This will establish a theoretical grounding for the course, as well as giving us a concrete example of the ways in which text and image (still and moving) translate across different media.
Posted by Virginia Kuhn at 3:00 PM No comments: